Visit the Hours and Contacts page to see how you can get in touch with a librarian to assist you with your research.

When quoting directly, always provide the author, year, and page number of the quotation in the in-text citation in either parenthetical or narrative format.

Block quotation can be found in Section 8.27 of the APA Manual, 7th ed.

Recently, the ultra-diffuse galaxy (UDG) Dragonfly 44 in the Coma Cluster was observed and observations of the rotational speed suggest that its mass is almost the same as the mass of the Milky Way. On the other hand, interestingly, the galaxy emits only 1% of the light emitted by the Milky Way. Thus, astronomers reported that Dragonfly 44 may be made almost entirely of dark matter. In this study we try to determine whether or not the dark matter that constitutes Dragonfly 44 can form a wormhole. Two possible dark matter profiles are used, namely, UDG King’s model and generalized Navarro–Frenk–White (NFW) dark matter profile. (p. 241)

The information provided is from the APA Manual, 7th ed. (Sections 8.29, 8.31) and the APA Style website

Errors containing Quotations: If any incorrect spelling, punctuation, or grammar in the source might confuse readers, insert the word "[sic]," italicized and in brackets, immediately after the error in the quotation.

Changes to a Quotation Requiring Explanation: 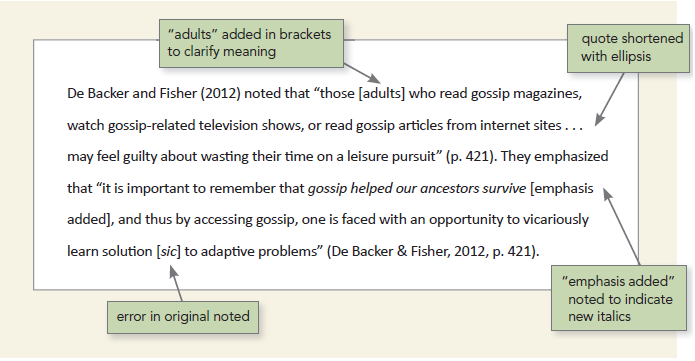 Paraphrasing restates another's idea (or your own published idea) in your own words and is the preferred method of citing sources in an APA paper. When paraphrasing, cite the article using the last name of the author(s) and the year, so your reader can find the full citation in the reference list. Although it is not required to provide a page or paragraph number in the citation, you may include one.

According to Islam et al. (2018), Dragonfly 44, located in the Coma Cluster of the ultra-diffuse galaxy (UDG), is similar to that of the Milky Way with the exception of being almost entirely made of dark matter and having the possibility of forming wormholes (p. 241).

Long Paraphrases: If the paraphrase is several sentences, it is not necessary to repeat the citation as long as the context of the writing makes it clear that the same work continues to be paraphrased.

Velez et al. (2018) found that for women of color, sexism and racism in the workplace were associated with poor work and mental health outcomes, including job-related burnout, turnover intentions, and psychological distress. However, self-esteem, person-organization fit, and perceived organizational support mediated these effects. Additionally, stronger womanist attitudes - which acknowledge the unique challenges faced by women of color in a sexist and racist society - weakened the association of workplace discrimination with psychological distress. These findings underscore the importance of considering multiple forms of workplace discrimination in clinical practice and research with women of color, along with efforts to challenge and reduce such discrimination.

The information provided is from the APA Manual, 7th ed. (Section 8.17) and the APA Style website

When a work has 2 authors, cite both names every time the reference occurs in the text.

When a work has 3 or more authors, include the name of only the first author plus "et al." in every citation.

Helpful Tip: Some papers may have authors that have the same name. To avoid uncertainty and confusion, refer to the APA Manual, 7th ed. Sections 8.18 - 8.20.

The information provided is from the APA Manual, 7th ed. (Section 8.28)

If the material does not contain any page numbers, provide the readers with another way of locating the quoted passage.

The information provided is from the APA Manual, 7th ed. (Section 8.6)

If possible, find the primary source and cite it rather than citing a secondary source.

If the author and the year of the original work are known, include them in the in-text citation.

If the year is unknown, omit from the in-text citation.