This video by AACT traces the history of chemistry from the discovery of fire, through the various metal ages, up to the great philosophers.

The Greeks had no way of testing out their ideas, and thus no definitive conclusion could be reached about the divisibility of matter.

The next 2000 yrs. = Alchemists were believed to be mystics and fakes but were actually serious scientists who discovered several elements and learned to prepare the mineral acids. Alchemy is a pseudoscience also considered medieval chemical science.

This video by CrashCourse explains how we went from alchemists to chemists, the law of conservation of mass, how we came to have a greater understanding of how chemical compounds work, and eventually a complete understanding of what atoms and molecules are.

Antoine Laviosier (1743-1794): A French chemist was finally able to explain the true nature of combustion.

Joseph Proust (1754-1826): A French chemist who showed that a given compound always contains exactly the same proportion of elements by mass.

Compound II contains twice as much oxygen per gram of carbon as compound I. (This can be explained in terms of atoms).

In 1808, Dalton published A New System of Chemical Philosophy and with it, his theory of atoms.

In Dalton's time, the formula for water was unknown, but that it was composed of oxygen and hydrogen (8 g of oxygen present for 1 g of hydrogen).

Dalton prepared the first table consisting of atomic masses (sometimes called atomic weights) that was later proved to be incorrect because of his assumptions on formulas of certain compounds.

Joseph Gay-Lussac (1778-1850):  A French chemist measured (under the same conditions of temperature and pressure) the volumes of gases that reacted with each other.

Amadeo Avagadro (1776-1856): An Italian chemist interpreted Gay-Lussac's results and proposed that at the same temperature and pressure, equal volumes of different gases contain the same number of particles (this assumption is called Avogadro's hypothesis).

If this assumption is correct, then 2 molecules (a collection of atoms) of hydrogen react with 1 molecule of oxygen to produce 2 molecules of water.

These observations would then be assuming that gaseous hydrogen, oxygen, and chlorine are composed of diatomic (two-atom) molecules: H2, O2, and Cl2.

This observation suggests that the formula for water is not OH like Dalton thought, but H2O.

Avogadro's interpretations were not accepted by most chemists and in the nineteenth century, measurements of masses for different elements that combined to form compounds were taken.

This resulted in a list of relative atomic masses.
Jöns Jakob Berzelius (1779-1848): A Swedish chemist contributed to this list by discovering cerium, selenium, silicon, and thorium. He developed modern symbols for the elements used in writing the formulas for the compounds.

Early Experiments to Characterize the Atom

Since this ray was produced at the negative electrode and repelled by the negative pole, Thomson hypothesized that the ray was a stream of negatively charged particles, which are now called electrons. 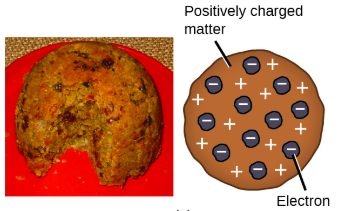 Thomson was trying to understand the structure of the atom with the experiments that he was conducting. He hypothesized that all atoms must contain electrons. He knew atoms were known to be electrically neutral and began to consider that an atom consisted of a diffuse cloud of positive charge with the negative electrons embedded randomly in it.

The illustration to the right is called the plum pudding model because the electrons are the raisins dispersed in a pudding (positively charged cloud) just like the English dessert.

This video by Tyler DeWitt discusses the discovery of the electron by the cathode-ray tube experiment. 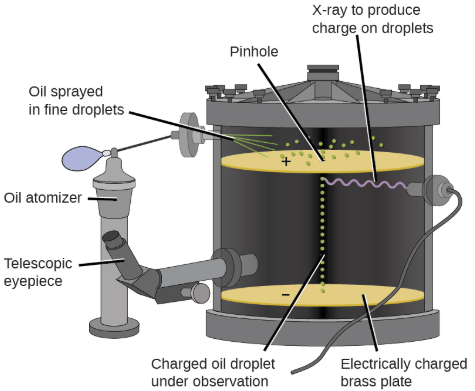 Robert Millikan (1868-1953): An American physicist conducted experiments that allowed him to determine the magnitude of the electron charge by involving charge oil drops.

The illustration on the left shows the schematic representation of the apparatus that was used to determine the charge of the electron. The fall of the charged oil droplets can be halted by the adjustment of the voltage across the two plates. The voltage and the mass of the oil droplet can then be used to calculate the charge.

For more information regarding Robert Millikan and the oil drop experiment, view Tyler DeWitt's video Charge of an Electron.

Henri Becquerel (1852-1908): A French scientist who, in 1896, accidentally discovered that a piece of mineral containing uranium could produce its image on a photographic plate in the absence of light. He credited this phenomenon to the spontaneous emission of radiation by the uranium, which he called radioactivity.

There are three types of radiation emission:

Ernest Rutherford (1871-1937): A New Zealand scientist who named the α and β particles and the γ ray. He coined the term half-life to describe an important attribute of radioactive elements.

Rutherford was testing the accuracy of Thomson's plum pudding model which involved directing α particles at a thin sheet of metal foil. His hypothesis was that if Thomson's model was accurate, then the α particles should go through the thin foil with very minor deflections.

This is an illustration of the experiment that Rutherford was using to prove the accuracy of Thomson's plum pudding model. There is a box that contains the source of α particles and shoots a beam towards a thin metal foil. A screen has been placed around the foil with a slight opening for the beam in order to detect the scattered α particles. 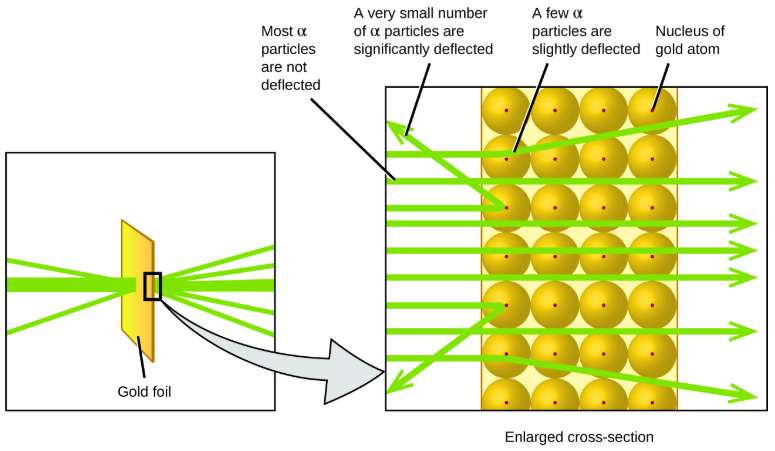 Instead of the particles passing through with only a minor interference in their path, the results showed that most of the α particles passed through the foil, but many of them were deflecting at large angles and reflecting (but not hitting the detector).

Due to these results, Rutherford knew that the plum pudding model was incorrect and the large deflections were caused by a positively charged concentrated center containing most of the atom's mass.

Nuclear atom: An atom with a dense center of positive charge (the nucleus) with electrons moving around the nucleus at a distance that is large relative to the nuclear radius.

The atom consists of:

Protons: A positively charged particle equal in                   magnitude to the electron's negative charge

The nucleus is small in size compared with the overall size of the atom and it has an extremely high density.

Atomic number = # of protons = # of electrons

However, each sodium atom has neutrons in its nucleus, and different sodium atoms exist that have different numbers of neutrons.

Since the chemistry of an atom is due to its electrons, isotopes show almost identical chemical properties and in nature, most elements contain a mixture of isotopes.

This video by Tyler DeWitt explains what isotopes are and how to write the atomic number and mass number in isotope notation.