An interesting characteristic of an atom is its ability to combine with other atoms to form compounds. Atoms have electrons that are responsible for bonding one atom to another.

Chemical bonds - Forces that hold atoms together in compounds.

Molecule - A bonded collection of two or more atoms of the same or different elements.

Chemical formula - The representation of a molecule in which the symbols for the elements are used to indicate the types of atoms present and subscripts are used to show the relative numbers of atoms.

Example: Carbon dioxide is CO2; This molecule contains one atom of carbon and two atoms of oxygen.

Structural formula - The representation of a molecule in which the relative positions of the atoms are shown and the bonds are indicated by lines.

Structural formulas may or may not indicate the actual shape of the molecule.
Example:

Water can be represented as 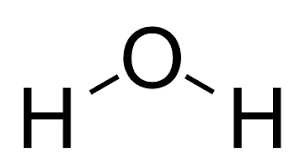 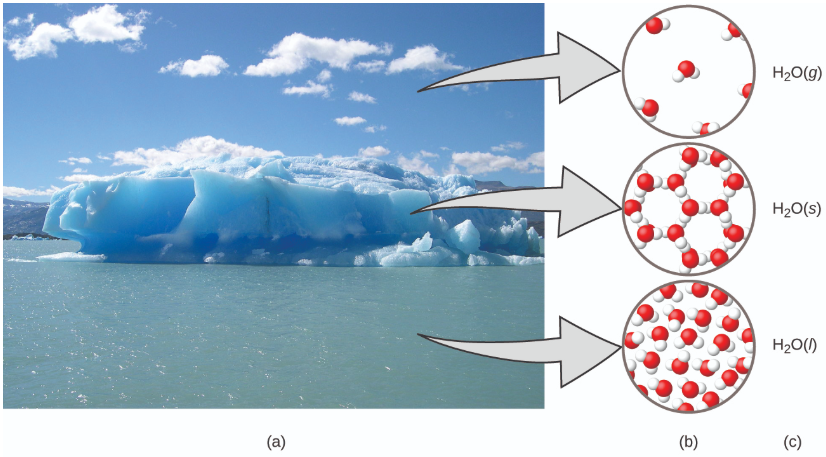 (a) Moisture in the air, icebergs, and the ocean represent water in the macroscopic domain. (b) At the molecular level (microscopic domain), gas molecules are far apart and disorganized, solid water molecules are close together and organized, and liquid molecules are close together and disorganized. (c) The formula H2O symbolizes water, and (g), (s), and (l) symbolize its phases. Note that clouds actually comprise either very small liquid water droplets or solid water crystals; gaseous water in our atmosphere is not visible to the naked eye, although it may be sensed as humidity. (credit a: modification of work by “Gorkaazk”/Wikimedia Commons)

Ion - An atom or group of atoms that has a net positive or negative charge.

Helpful Hint: Think of the first "n" in anion = negative

Cations and anions have opposite charges and attract each other. This force of attraction between oppositely charged ions is called ionic bonding.

Polyatomic ion - An ion containing a number of atoms.

Helpful Hint: When dealing with polyatomic ions, you should memorize the formula and the charge.

Ionic solid - A solid containing cations and anions that dissolves in water to give a solution containing the separated ions, which are mobile and thus free to conduct an electric current.

Cell phones are made from numerous chemical substances, which are extracted, refined, purified, and assembled using an extensive and in-depth understanding of chemical principles. About 30% of the elements that are found in nature are found within a typical smart phone. The case/body/frame consists of a combination of sturdy, durable polymers composed primarily of carbon, hydrogen, oxygen, and nitrogen [acrylonitrile butadiene styrene (ABS) and polycarbonate thermoplastics], and light, strong, structural metals, such as aluminum, magnesium, and iron. The display screen is made from a specially toughened glass (silica glass strengthened by the addition of aluminum, sodium, and potassium) and coated with a material to make it conductive (such as indium tin oxide). The circuit board uses a semiconductor material (usually silicon); commonly used metals like copper, tin, silver, and gold; and more unfamiliar elements such as yttrium, praseodymium, and gadolinium. The battery relies upon lithium ions and a variety of other materials, including iron, cobalt, copper, polyethylene oxide, and polyacrylonitrile. 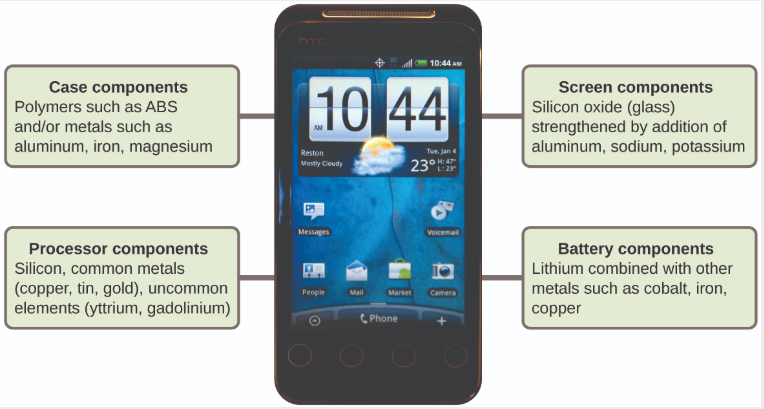 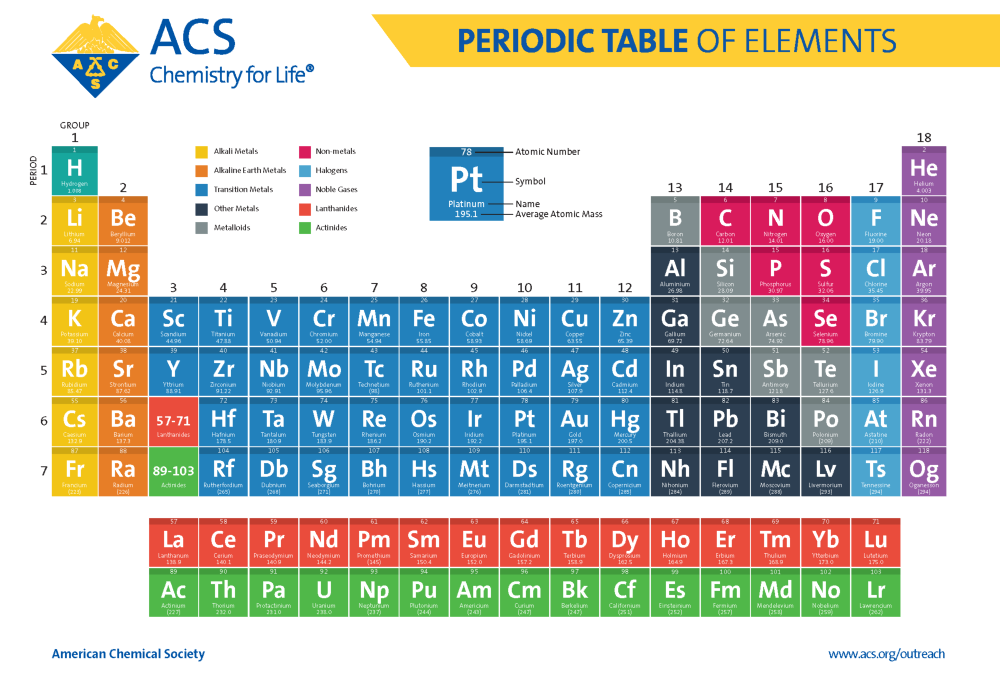 Download a PDF version of the periodic table from the American Chemical Society.

An interactive version of the periodic table is available on the Royal Society of Chemistry website.

Atomic number - The number of protons and the number located above each element symbol.

Metals - Efficient conductors of heat and electricity, malleable (can be hammered into thin sheets), ductile (can be pulled into wires), and often lustrous (although tarnishes readily). Metals tend to lose electrons to form POSITIVE ions (cations).

Nonmetals - Appear in the upper-right corner of the table except for Hydrogen which resides in the upper-left corner. Lack the physical properties that characterize the metals. Nonmetals tend to gain electrons to form NEGATIVE ions (anions).

Groups or families - The vertical columns in the periodic table and have similar chemical properties.

Group B - Transition elements; They are all metals and have numerous oxidation/valence states.

Periods - The horizontal rows of elements in the periodic table.